AN END TO END ADVENTURE 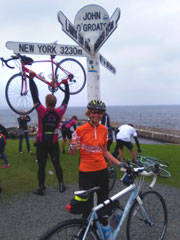 This time last year, I did what lots of people do when celebrating 'A Big Birthday' - I made a hasty decision to do something challenging. Which is why a few weeks ago, I found myself standing outside the entrance to Lands End, the most westerly point of the UK, clutching my bike. With me were 43 other people who had made the same hasty decision. We posed for a group photo under the blue sky of a Cornish summer morning. Hiding our nervousness behind smiling faces, we engaged in some lighthearted cycling-related banter. Then, before we had chance to change our minds, the challenge leader waved us off and we started to pedal. Our End-to-End adventure had begun.

Lands End to John O'Groats is the classic British cycling challenge. We were to tackle the distance over 12 days, covering nearly 1,000 miles / 1,610 km in total and averaging around 80 to 90 miles / 130 to 145 km per day. Between us, we were raising money for more than a dozen charities. 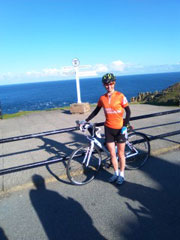 What did we encounter along the way? Well, I won't lie, we came across a lot of hills. In fact, for that reason, the first few days were pretty tough. To be fair, we had been warned. None of the Cornish hills we climbed were particularly big, but they did come thick and fast. On the second day, Dartmoor also had some hefty climbs. Later, we were to encounter the nine-mile ascent of Shap Fell in Cumbria and a particularly monstrous hill near Loch Ness. By the time we'd reached the most westerly point of Scotland, we'd learned to love those hills - well, almost.

Thankfully, there was also plenty of scenery to admire, which helped to take our minds off aching legs and the pain of being in the saddle for hours on end. As well as the moorland beauty of Dartmoor, there were the Mendips in Somerset, the Wye Valley, Shropshire Hills, Cumbria and the whole of Scotland. I lost track at the number of times we came over the crest of a hill to find an amazing landscape laid out before us. 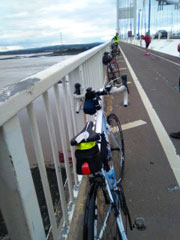 Of course, we also encountered plenty of traffic. When you are cycling such a distance, it is hard to avoid roundabouts, major roads and lorries. The roads leading to the old Severn Bridge spring to mind. So too do cities like Exeter, Warrington and Preston. It is here that we learned that teamwork can really pay off: when it comes to cycling in heavy traffic, there is nothing quite like safety in numbers.

As you would expect, we encountered some people who weren't so happy to share the road with a bunch of lycra-clad cyclists. On the other hand, these occurrences were far and few between. On the whole, other drivers were patient when we made last-minute lane changes or struggled to navigate and had to stop and ask a local. We were even given sponsorship money by some kind-hearted travellers, who were interested in our exploits.

Overwhelmingly, though, the challenge brought home to me just how much the support of those travelling with you can make the difference between success and failure. Not only were we looked after by an amazing team of guys from Discover Adventure, but we also formed a tight-knitted community of fellow cyclists who looked out for each other. Of course I'll remember the many miles covered and the money raised for my charity. But above all, the camaraderie will linger long after the saddlesores have disappeared. 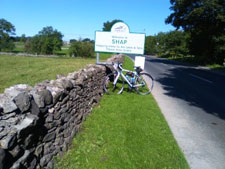 Photograph showing the entrance to the scenic village of Shap, in Somerset. 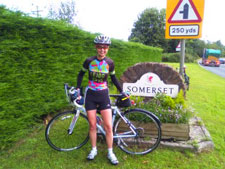