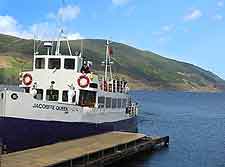 It has been years since anything exciting has been spotted lurking around Loch Ness and captured on camera, and at last it looks like there is actually some reasonable scientific proof that a sizeable creature of sorts is living here.

A recent tourist boat using state-of-the-art sonar equipment to detect fish recorded a serpent-shaped object moving beneath the vessel, at a depth of around 23 metres / 75 feet. Recorded in the waters of Urquhart Bay, close to Urquhart Castle, this sonar image measured in at more than 21 metres / 70 feet in length and over 1.5 metres / 5 feet wide. It has certainly got people talking about the mythical beast of Nessie, since apparently the loch's fish don't live and shoal at this depth, and the resident seals of Loch Ness are obviously considerably smaller.

Sceptics are claiming that this unknown object is simply a collection of algae, following the flow of the water. However, one thing is for certain, the hotels of Loch Ness and nearby Inverness can be assured of a bumper season this summer, come rain or shine. Be sure to book well ahead if you are going to join the crowds of monster hunters.


TOWERING OVER THE THAMES 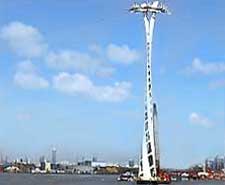 With less than 100 days to go, the countdown to the London Olympic Games is now really on. Even the BBC has a sitcom about the organisation of the games, which is now in its second series - Twenty Twelve, starring Hugh Bonneville of recent Downton Abbey fame. It's hilarious.

Three of the most prominent Olympic landmarks are the elegant and rather contemporary 90-metre / 30-foot white pillars crossing the River Thames. These have been built to power a cable car and connect the O2 Arena with the Royal Docks / ExCel Centre, where both weightlifting and martial arts will be the main events. Named the Emirates Air Line, these cable cars are expected to transport more than 2,000 passengers per hour (equivalent to some 35 to 40 buses), meaning that pressure on London's roads will be eased, if it all goes to plan of course.

Much of the overall structure and cabling has now been completed, and it really does look very impressive, and very tall. Now quite over budget, the final cost is estimated at roughly £45 million, much of which has been sponsored by its namesake, the Emirates airline based in Dubai. This is actually the UK's very first urban cable car, although many other cities around the world have similar transport systems in place, including Barcelona and Lisbon, and even the Big Apple, New York. So, if you're in London for the summer Olympic chaos and crowds, at least you'll be able to get a great view of the Thames.


CRUISING FOR A HOLIDAY? 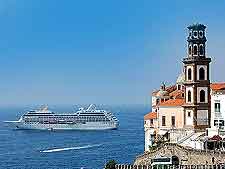 The 15th April 2012 will mark the 100th anniversary of the tragic sinking of the RMS Titanic, which famously collided with an iceberg en route to New York. Nowadays, a full century on, cruise liners are virtually unrecognisable, being colossal giants of the sea and more like floating towns, with pools, restaurants, cinemas, ballrooms, nightclubs and all of the home-comforts that you could ever need.

The past few months have seen a number of 'incidents' onboard some of the biggest liners. Especially memorable is the Costa Concordia disaster (operated by Costa Crociere), which made headlines around the world when it struck a rock on 13th January 2012 close to Palermo. With more than 4,000 people onboard, had this ship sunk, it could have been far worse than the Titanic's death toll of just over 1,500 people. However, 32 deaths is still a terrible figure.

A little more than a month later, its sister ship named the Costa Allegra suffered fire damage on 27th February 2012, leaving it stranded and without power just off the coast of the Seychelles. As a direct result of these recent Costa Crociere dramas, cruise bookings for this year have dropped by more than 30 percent, with potential passengers losing faith in the competency of these captains, who are responsible for so many tens of thousands of lives each year. If Christopher Columbus or Sir Francis Drake were still alive, I'm sure that they'd be in great demand, and perhaps even the wonderful Captain Jack Sparrow would be perfect for heading up a Caribbean cruise holiday.

Cruise ships are fighting back to regain some of this lost confidence, offering enticing all-inclusive package deals. In fact, the PSA (Passenger Shipping Association) still maintains that a holiday of this kind is amongst the safest around. However, not everyone is convinced after the recent events and potential tragedies have unfolded.

If you are looking for a cruise holiday, then Vietnam is anticipating a huge season, with ships stopping off at destinations such as Can Tho and Ho Chi Minh City. Saga are offering tempting luxury Caribbean cruises with all the trimmings for the over 50s, while Disney have just christened a new ship named 'The Fantasy', the fourth in their expanding fleet. And would I consider a cruise myself? No chance, I'd be seasick without a doubt!