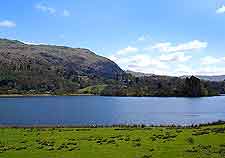 Every Easter holiday, we go youth hostelling somewhere in the UK. It is become something of a family tradition. Last year was the Peak District. This year, we decided to head to the Lake District, with its spectacular mix of lakes, hills and woods. Of course, thanks to an optimistic weather forecast, lots of other people had the same idea. Which is why we ended up not in a family room in a youth hostel, but in a camping pod in a field next door.

We've done a fair bit of camping in our time, so we weren't that disappointed by the last-minute change of accommodation. In fact, we were fairly excited at the prospect of staying in what are essentially wooden tents with all mod cons. If it had rained - which it didn't, quite miraculously - we would have been as dry as a bone. We had a small heater to ward off night-time chills, and a table lamp. In the morning, when the sun emerged from behind the trees, we were able to lounge on the decking outside the pod, soak up those early rays and enjoy views over nearby Esthwaite.

We were, to all intents and purposes, indulging ourselves in a spot of 'glamping', a relatively new concept in which camping and glamour come together. It is a stylish blend; a far cry from memories of mildewed canvas and cries of 'don't touch the sides'. Come to think of it, there were no flapping guy ropes, either.

Would we do it again? The answer is that we probably would. The pod made us feel that we were staying right at the heart of the great outdoors, with all its sights and sounds and smells. At the same time, we rested safe in the knowledge that, at any point, we could retreat through our very own lockable French doors to the warmth and cosiness of the pod. It seems like the perfect way to contend with the often challenging weather conditions experienced on some UK camping holidays.

I like to think of it has having the best of both worlds.


A CASE FOR TRAVELLING SLOWLY 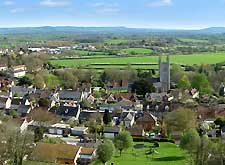 Last Sunday, I pedalled my way around the English counties of Wiltshire and Somerset. And I wasn't on my own. Around 1,500 other cyclists taking part in The Lionheart Cyclosportive were keeping me company. Now, I'm by no means a speedy cyclist, so it took a while to cover the route. During the course of the day, it gradually dawned on me that the world looks a whole lot different from what you see through a car window.

When you slow things down, you get to see more. You relax and notice things that might otherwise have passed you by. Like the roaring of the wolves as you cycled past Longleat Safari Park. Or the bright yellow daffodils that nodded their heads either side of so many of the back country lanes en route. Picture postcard villages popped up when you were least expecting them. They included places like Batcombe, a deligthful East Somerset village, with a beautiful church and four hundred-year old pub.

And then there were the views. The effort of climbing all those hills (and there were plenty of them) was amply rewarded with some rather splendid panoramas. On the way to the pretty little village of Evercreech, for example, there is a moment when you glance to the left and the whole of Longleat Forest lies before you, complete with St. Alfred's Tower perched on top, silhouetted against the sky. Likewise, rising out of the small Wiltshire town of Mere, you get to see the Deverill Valley in all its glory. On the other side are the Upper Deverills and Cold Kitchen Hill. Its distinctive beacon was last lit to celebrate Queen's Golden Jubilee in 2012. If it hadn't been so windy on top of Mere Down, I might have stayed longer to admire the countryside spread out before me.

My sedate pace of travel also gave me plenty of time to swap stories with fellow cyclists and to partake of refreshments at the food stops provided along the way. I got to enjoy the smells of the countryside, some more fragrant than others.

Sixty miles and several hours after I set off, I swooped down the main drive to Longleat House. I arrived at the finish line with wobbly legs and the feeling that, sometimes, it is good to travel slowly.


HIDDEN CULTURAL WONDERS OF THE WORLD 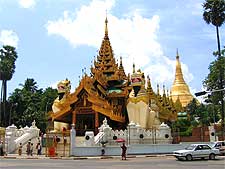 This year, Burma is preparing to welcome three million foreign visitors and has been awarded the title of World Best Destination for 2014 by the European Council on Tourism and Trade. It is hard to believe that, until a few years ago, tourists were discouraged from visiting the country altogether. Now, Iran is experiencing a similar resurrection of its own tourism industry. So far this year, tour bookings have risen remarkably.

What made the difference in Burma was a complete overhaul of its system of government. In 2012, the pro-democracy icon, Aung San Suu Kyi, was elected and Burma once again opened its doors to tourists. In Iran, it seems to be a similar story. The election of a new president in 2013 and a thawing in international relations has led to its reappearance on travellers' 'must-do' lists.

What the two countries also have in common is that they tend to attract the culturally inquisitive who can't resist a glimpse of some of the world's most-hidden away cultural wonders. Among Burma's top attractions are gilded pagodas, richly decorated palaces, whitewashed monasteries and atmospheric lost cities. One of its most sacred sites is the glittering Shwedagon Paya. As well as being something of a religious nerve centre, this awe inspiring Burmese landmark also became a venue for pro-democracy rallies in the 1980s.

Iran once lay at the heart of the powerful Persian Empire. Hence, its cultural treasures are impressive historic sites. They include an abundance of mosques and beautiful gardens, as well as ancient cities, Zoroastrian burial towers and some of the best Islamic architecture in the region. Highlights include the ancient city of Persepolis with its great palace complex, the ancient capital of Shiraz, the mosques and immense Imam Square of Isfahan, and the Golestan Palace, which once lay at the heart of Tehran.

Iran is considered to be safe by most countries and visa restrictions have recently been relaxed for all but a handful of nations. Like Burma before it, so long as the political situation remains stable, it looks like Iran's cultural wonders will soon be open to more than a handful of single-minded tourists.