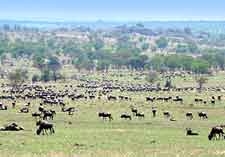 When I was a kid, one of my favourite TV series featured a man called Johnny Morris and a parade of animal actors who - quite miraculously, I thought - were all able to talk. 'Animal Magic' inspired in me a life-long love of wildlife and the great outdoors.

Nowadays, nature documentaries don't feature talking animals. However, with improvements in filming technology, they are just as much an inspiration - not just to me, but a whole host of animal lovers the world over. Which might explain why more and more people are choosing to spend their annual holiday not lounging in a deckchair, but tucked away in a camouflaged hide or bouncing along in a four-wheel drive on remote dusty tracks.

One thing's for sure; the world boasts a lot of wildlife. Some of the most popular wildlife tourism destinations can be found in some exotic places. Africa is widely regarded as the birthplace of the safari holiday. Such countries as Kenya and Botswana certainly have a world-famous and long-established reputation for big game reserves. So too has India, which is home to over 3,000 tigers, amounting to around half of the entire world's population. Then there is penguin-watching on the western cape of South Africa, and even bear tracking in Finland. 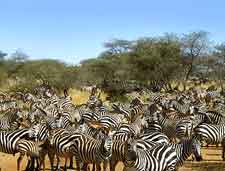 Wildlife tourism isn't just about looking out for land-based animals. A great holiday experience can be had on the water, too. Whale watching off America's New England coastline is a perennial favourite. And closer to home, Scottish wildlife tourism is particularly vibrant these days, with visitors flocking northwards to see everything from basking sharks to bottlenose dolphins.

Of course, wildlife tourism is not without its critics. There are those who argue that all those tourist footsteps might damage critical habitats, particularly if the development of tourist facilities isn't strictly regulated. For others, though, tourism is seen as essential to conservation, helping to safeguard some of the most vulnerable animal species on the planet.

Tailor-made holidays sound ideal, but set itinerary holidays are usually a cheaper option. Either way, it is worth paying to be guided by an expert to have a chance of enjoying a bit of your own animal magic. 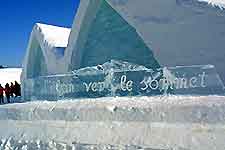 As temperatures plummet and we even see a sprinkling of the white stuff, it seems that winter will never end. Spring looks a far distant prospect. And as for the summer... well, enough said. In the past, I've tried to bridge the gap between the seasons with an impromptu holiday - with great success.

Over the years, what I've found is that winter breaks don't have to be lengthy. And they certainly don't need to involve a long-haul flight. All that is required is a spare weekend you can call your own and a location that is an hour or two away.

For an upbeat break, you can't beat those classic European cities like Amsterdam, London, Madrid and Paris, which offer culture and cosmopolitanism a-plenty. Opportunities to visit museums and chic restaurants abound, leaving you feeling like you've been away for longer. Deep in the heart of northern France, stay amidst the grandeur and ornateness of a Normandy country house for a night or two. To soak up the sunshine, head to Spain for the weekend, where cities like San Sebastian combine seaside and style in one winter package.

Of course, if you are the sort of person that simply can't get enough of winter, you could always head to Swedish Lapland, where the original ice hotel was set up, to marvel at the natural wonder of the northern lights and enjoy a spot of sledding.

Shortly before Christmas, I was invited to take part in a fitness day at a local luxury hotel - Ston Easton Park in Somerset. As part of a small focus group, I would be testing out a range of activities, including Nordic walking, hula hooping and yoga. It turned out to be a great day. I discovered that I could still wield a hula hoop and that walking with poles is a brilliant way to keep fit and breathe in some fresh country air at the same time. At the end of the day, a session of yoga left me feeling chilled out and ready to face pretty much anything.

A desire to 'get fit' has to be one of the most popular New Year's resolutions, which is why, come January, gyms fill up with folk who are eager to fulfill the promises they made themselves over a glass of bubbly on New Year's Eve. By the end of the first week, it comes as no surprise that many of those good intentions have already started to flag. Life gets in the way and it is all too easy for that initial impetus to simply fizzle out.

What we really need, of course, is a little help in the motivation department - something that my day at Ston Easton certainly brought home to me. Sometimes, all you need is someone to inspire you - in this case, instructors Jennie and Judith. It also helps to make sure that you keep the fun in fitness. That way, it is not a chore and you are much more likely to squeeze your chosen fitness activity into an already packed schedule at work and home. Your surroundings can also make a huge difference. Personally, I'd much rather opt for a view that includes green fields, rolling hills and country lanes than the sweaty interior of a gym. Combine a spot of keep fit with a short break away from home and you might just hang onto those resolutions for a while longer.


SKIING IN THE NEW YEAR, ON THE SLOPES 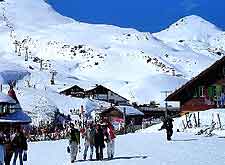 For many people, Christmas is best followed by a skiing holiday, with plenty of fresh snow, cosy chalets and après-ski offerings consisting of bars, nightclubs and general socialising. This year, the Alps can already boast heavy snowfalls, meaning that the slopes and plentiful ski resorts around this range are already filling up. Top choices include those of Valais, Switzerland (Champery, Crans Montana and Zermatt), as well as Avoriaz, Chamonix and Megeve in Haute-Savoie, eastern France (in the Rhone-Alpes region, close to the Swiss and Italian borders).

Do consider rail / ski packages, lessons for children and beginners, the cost of ski-gear hire and what you will be able to do in the evenings. The costs can quickly begin to add up if you are not careful, particularly in the most popular resorts, so do shop around. It has recently been reported that World Cup Alpine skier Dougie Crawford is actively promoting the slopes of Scotland, offering a very different and more affordable winter break possibility for ski-enthusiasts in the UK.