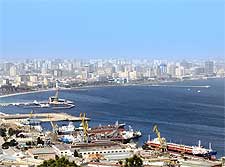 You either love it or your hate it. Either way, tens of millions of people will be tuning into the final of the Eurovision Song Contest. This will be the 57th staging of the contest, an event that has become synonymous with a very distinctive brand of Euro-inspired pop music and is sprinkled with a generous helping of glamour and glitz.

The first Eurovision took place in Lugano, Switzerland, in 1956. Every year since then, members of the European Broadcasting Union have embarked on a search for the ultimate winning song. The voting procedure is legendary, with the infamous 'nul points' universally feared by those who take part. It is also known to be less than friendly at times, with frequent claims of strategic voting and general skulduggery. This year's Eurovision comes from the Azerbaijan capital of Baku and has come into conflict with human rights' demonstrators. Throughout its history, the contest has frequently been the subject of overt political action. You can certainly be sure that the hotels of Baku will be bursting at their seams this weekend, with the city's Heydar Aliyev International Airport never busier.

Eurovision 2012 has attracted the public's interest for a rather unusual reason - the age of some of it contestants. At 75 years of age, the UK's Engelbert Humperdinck was widely regarded as the oldest singer to perform at the contest. That was the case until he was pipped at the post by a group of six elderly ladies from Russia known as the Buranovo Grannies. One of them, Natalya Pugacheva, is 76 and thus destined to wear the mantle of oldest ever competitor.

Which all goes to show that like the contest itself, still going strong after over half a century, age is no barrier.

This week, the eyes of the world were on a very special flame. Lit by the early spring rays of a Greek sun, the Olympic torch was officially handed over in readiness for this summer's London 2012 Olympic Games. Safely unloaded onto British soil, it will embark on a mammoth 70-day relay that travels the length and breadth of the country's highways and byways.

The Olympic's torch's statistics are remarkably easy to remember. It will be carried by 8,000 torchbearers over a total distance of 8,000 miles. The torch's aluminium alloy casing is punctured by 8,000 tiny circles that will allow the light to shine through, exposing its inner workings. It stands 800 mm in height and weighs in at a modest 800 grams.

Over the course of the torch relay, nothing has been left to chance. The torch has been extensively tested to make sure that it can withstand any weather condition that can be thrown at it, from a sudden snowstorm to a stiff wind. It can even be dropped without dire consequences from a height of 3 metres / 10 feet. At night, it will be kept in a specially-designed lantern under lock and key.

The torch relay has been a part of Olympic tradition since the earliest Games took place in Ancient Greece. Back then, the lighting of the flame marked the start of a truce among warring factions throughout Greece. Today, the flame still symbolizes peace, unity and friendship.

The first step on the relay is Land's End, Cornwall's most iconic tourist destination. From there, it will pass such significant landmarks as Stonehenge and Leicester's National Space Centre. It will also travel by some rather unusual forms of transport, including taking a train up to the summit of Mount Snowdon in Wales, an inflatable boat across Loch Ness in Scotland, and a zipwire across the Tyne Bridge. Finally, the torch will take a much more sedate boat trip down the River Thames in London before being used by the last torchbearer to ignite the cauldron in the new Olympic Stadium to mark the official start of the Games.

And should the torch go out before it gets there? Well, apparently there's no need to panic. A 'mother flame', descended from the original flame in Athens, is always kept close to hand, just in case. 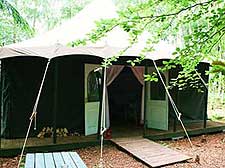 The trend for 'glamping' seems to show no sign of waning. Glamping is, of course, short for 'glamorous camping'. Glampers are those who fancy the idea of a holiday under canvas, surrounded by the great outdoors, but who don't want to go the whole hog.

It is thought that glamping has its roots in the musical festival scene, when a few innovative souls decided they'd had quite enough of waking up to all that mud and inconvenience. Whatever its origins, glamping holidays have become increasingly popular with British families over the past few years, as well as those in search of a romantic retreat. Yurts and tipis have sprung up all over Britain, along with canvas tents that would look perfectly at home in an African safari park. There are traditional shepherd's huts and tree houses. Even vintage caravans are getting a look in nowadays.

Glampers spurn the rough and ready in favour of something far more lavish. Amenities may include springy mattresses and freshly ironed linen sheets. If an evening chill sets in, they may even get to light their very own woodburning stove. Bath tubs and Jacuzzis often seem to be par for the course, complete with running hot and cold water. Never has ordinary camping seemed quite so basic.

More recently, glamping has become something of a global phenomenon. In fact, there are opportunities to enjoy the opulent outdoors just about anywhere in the world, from Holland and Spain, to Alaska and Australia. Whatever the venue, posh camping doesn't come cheap. That said, a night of glamping still costs less than a night in a posh hotel. Fresh air is thrown in for free of course.


DISNEYLAND PARIS ANNIVERSARY - IT'S BEEN 20 YEARS! 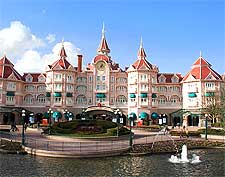 This spring sees the 20th anniversary of the opening of Disneyland Paris, which has been operating since April 1992, after almost a decade of planning and construction. It was first named Euro Disney and has been subtly renamed a number of times over the years.

Disneyland is located in the resort town of Marne-la-Vallée, within the easterly suburbs of Paris and roughly 32 km / 20 miles away. Since 1992, it has comprised two individual theme parks, following the arrival of its adjacent and somewhat less successful cousin, the Walt Disney Studios Park.

For me, I'm not sure if I could hack an entire week of Mickey Mouse parades, roller coasters and fairground rides - and queuing. I've enjoyed family days out at Legoland, but at the end of the day, to be honest, I'm quite glad to be going home, rather than waking up the next day and doing it all over again, and again! However, it looks like I'm in the minority, since more than 15 million visitors now come here every year, despite the often unreliable European weather - after all, it's not the sunny and more appealing Californian weather enjoyed by Disneyland in Anaheim, or Walt Disney World in Orlando, Florida. These enormous visitor numbers mean that the Paris version has actually become not only the biggest themed attraction in France, but in the whole of Europe. Have you been for a ride on the 'Indiana Jones et le Temple du Péril'?