YEAR OF THE MONKEY 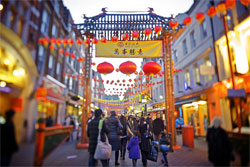 The Chinese New Year may already have got underway this week with a firecracker or two, but as far as festivities go, this is only the beginning. In London, which hosts the biggest celebrations in the whole of Europe, this weekend marks the start of a packed programme of events that promises an abundance of dragons, dance and decorations.

The highlight of London's festivities take place on Sunday with a grand parade that snakes its colourful way into Chinatown. Meanwhile, back in Trafalgar Square are traditional Chinese dance and operatic performances. At the end of the day, a grand finale is planned, which tells of the legend of the Monkey King. Naturally, festivities ends with a pyrotechnic performance that will, no doubt, outshine all others. No doubt celebrations will take place far into the night at Chinatown's restaurants and cafes - over 80 of them.

It is definitely worth making the effort to celebrate the start of the Year of the Monkey, the ninth of the Chinese zodiac animals because, let's face it, you won't get another chance for quite some time - 2028, to be precise. However, if you happen to have been born in another Year of the Monkey, then the signs for the year ahead aren't particularly auspicious, by all accounts. Which may mean that you need to pay a visit to the traditional Chinese Wishing Tree that has been installed just off Regent Street to make a wish for good fortune.


A WINTER WEEKEND BY THE SEA 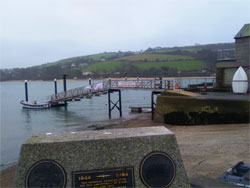 There is nothing quite like visiting the seaside in winter. Gone are the crowds of ice cream-eating tourists and the usual battle for a space in the car park. Instead, there is room to walk and linger, to stand and stare at the waves, with only a flock of seagulls for company. So, it was with some excitement that on the last weekend of January - a time when few people think about a British beach holiday - I ventured down to the Devon resort of Salcombe with some friends.

I stayed in the Salcombe Harbour Hotel and Spa, which certainly got the weekend off to a good start. My room overlooked the estuary, which was an unexpected pleasure. After a dip in the hotel's well-appointed pool, and a windy walk along the coastal path nearby, we ventured out into the streets of the town with their well-heeled shops. Bearing in mind the prices on display, it was probably a good thing that some of them of were closed.

The next day, wrapped in waterproofs and sporting woolly hats and gloves, we walked to a quirky cafe called the Winking Prawn just along the coast at North Sands. The surf was up and the sea was dotted with surfers taking advantage of the stormy conditions.

The Victorian traveller James Froude is often quoted in the town's tourist literature. According to Froude, 'Winter in Salcombe is winter in name only'. In some respects, his opinion still holds today. So, whilst some shops and cafes were closed, there was still plenty to do. And although the sun wasn't exactly blazing - in fact, it rained for quite a lot of the weekend - this didn't seem to matter one iota. It still felt like I was on holiday somewhere far more exotic than the Devon coast.

If you don't like crowds, then seaside towns like Salcombe offer the perfect opportunity to enjoy a winter pick-me-up. Hardly surprising then that, long after my friends had headed back home, I was still enjoying the sea view.