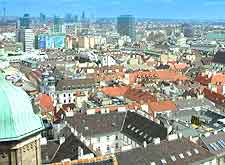 You either love it or you hate it. The Eurovision Song Contest might only be a music competition, but it is become an annual event that engenders unusually extreme emotions. This weekend, as Eurovision celebrates its 60th anniversary, those emotions will undoubtedly reach bursting point as the final 20 countries battle it out in the Austrian capital of Vienna.

The main venue is, of course, the Vienna Stadthalle, an arena that has been modelled in the shape of a huge eye and illuminated by a vast LED-loaded stage. What is perhaps less well known, though, is that, beyond the main stage, Vienna has this week played host to many other Eurovision-related events, including in the Eurovision Village on City Hall Square, where a big screen has been erected. Also set up especially for the competition is the Euro Fan Café on Dietrichgasse, where some of the keenest Eurovision fans have been meeting up to swap news and views on the contest.

Another veritable hub of activity in Vienna this weekend is The Euroclub, which will be hosted by the Ottakringer Brewery in Vienna's 16th district, just a stone's throw from the Wiener Stadthalle. By the end of the contest, it will have welcomed 3,000 journalists, delegates and performing artists from the participating nations. It'll also be the venue for the infamous After Party that follows the Grand Final. In normal circumstances, the Ottakringer Brewery is no shrinking violet - it is rated as one of Vienna's top cultural hotspots, hosting festivals and live shows. For the next two days, at least, it will also be the scene of much singing and dancing as some nations celebrate, whilst others cringe at the mere mention of 'nul points'.


COOL PLACES TO SWIM THIS SUMMER 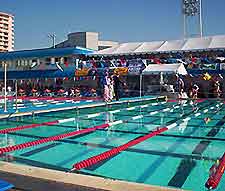 As a child, I lived in a town that boasted an open air pool. At the time I didn't appreciate how lucky I was. I can just remember the water feeling very cold - even in the summer - and wishing that we had an indoor pool like everyone else. These days, of course, open air swimming is becoming more and more popular, with many towns and cities in the UK boasting al fresco swimming facilities.

The newest kid on the block is the soon-to-be-opened King's Cross bathing pond. Situated just round the corner from the nearby railway station, the pond makes for an unlikely 'wild' swimming spot in the midst of the King's Cross development site. From what is dubbed a natural swimming pond, surrounded by wild flowers and ornamental grasses, swimmers get to enjoy views of cranes and high rise office blocks.

London's other options for a dip in the great outdoors include the world-famous Serpentine Lido. Unheated and unchlorinated, it attracts swarms of dedicated swimmers, even when the temperatures fall from vaguely warm to frankly perishing. For less hardy swimmers, there is always London Fields and Charlton lidos, both of which offer 50-metres / 164-feet worth of heated water.

Outside the capital, Jesus Green Pool in Cambridge is one of the longest outdoor pools in Europe and, at around 90 metres / 295 feet long, seems to go on forever. Cirencester Open Air Swimming Pool, opened in 1870, is reputed to be one of the oldest in the UK. Stonehaven's saltwater pool in Aberdeen is Olympic-sized and boasts plenty of Art Deco features. Thankfully, it is also heated to 84°F.

The pool of my childhood - Nantwich Outdoor Brine Pool - is also fairly unique. Opened to the swimming public of Cheshire in 1934, it is quite possibly the only remaining inland brine pool in the country. Fed from a nearby underground salty source, the temperature of the water is kept at a lukewarm 74°F. I can't say that I have fond memories of swimming there. Although I do recall defrosting after swims by drinking hot Vimto from plastic cups and eating Parma Violet sweets from the onsite tuck shop, which can't be bad. Of course, when an indoor pool was finally opened in 1976, my eleven-year old self promptly disappeared inside.


TAKING ON THE LEJOG CHALLENGE 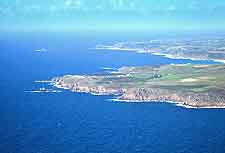 This September, I will be riding my trusty road bike from Lands End in Cornwall to John O'Gaunt in Scotland. It is a daunting prospect, made even more so when you hear about the amazing feats of other cyclists attempting the end-to-end trip. They include the likes of Charlie Mitchell and Dominic Irvine, a pair of tandem riders who have just completed the distance in a tad over 45 hours.

The dynamic duo have managed to ride their way straight into the record books by knocking five hours off the previous best time set nearly 50 years ago. Back in 1966, Pete Swinden and John Withers were the tough men of the cycling world. Before their attempt, they would trained for six years and spent hours in the saddle together. In the days before special sports nutrition, they favoured an on-the-bike diet of glucose-laced milk and homemade bread and butter pudding.

Since then, many attempts at the iconic ride have been attempted. Until this week, no one has been able to beat them, including Olympic gold medallist James Cracknell. For Irvine, it was his third attempt. On the first, he was stopped in his tracks by illness; on the second, his fellow tandem rider collapsed en route. And that is perhaps why the tandem record has been so hotly contested: it takes two riders to get over the finish line. Whilst logic dictates that tandem riders should be able to go faster than solo cyclists, the opposite is true. Tandem riding is as much about teamwork as it is about fitness.

As for my endeavour, well I will be riding solo (albeit with plenty of support from fellow riders and mechanics) and my main aim will be to raise money for my chosen charity, Arthritis Research UK. It is safe to say that speed records will not come into the equation; I'll be taking a much more sedate 12 days to LEJOG my way to the finish line. 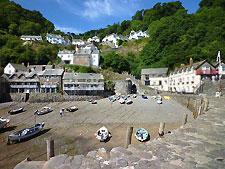 Yesterday, I took a trip down memory lane. More specifically, I made a whistle-stop tour of the tiny North Devon village of Clovelly, with its car-free cobbled street, donkeys, whitewashed cottages and quaint harbour. I was last there as a young child, with my parents. It was the late-1970s. We were camping nearby. It must have made quite an impression on me, though, because, even now, my memories are vivid.

As a child, of course, whilst I loved the fairy tale charm of the place, I didn't appreciate its history. The great Victorian writer Charles Kingsley, of 'The Water Babies' and 'Westwood Ho!' fame, lived here. Nor did I appreciate that, to maintain a time warp like Clovelly is no easy business. Since the early 1980s, the village has been under the ownership of one John Rous, one of three families to be associated with Clovelly over the past 800 years. He's also a descendent of former prime minister Herbert Henry Asquith. As landlord of this unique living village-cum-tourist attraction, there is a lot to think about, from making sure Clovelly's buildings are preserved sympathetically, in keeping with their heritage, to ensuring that those who live there are permanent residents, rather than weekend holiday-makers.

As I wandered down the main street, lined on either side with tiny cottages, shops, cafes and New Inn pub, I joined the smattering of late springtime tourists in wondering how on earth it is possible to live in a place that has a practically vertical main street. One where provisions have to be brought in by hand-dragged sled, built more for their utility than their good looks (let's just say that plastic bread crates are involved). More specifically, I wondered how they managed to get their fridge-freezers delivered. And what about sofas and a new TV? Getting workmen to mend roofs and fix garden walls must be a nightmare, I pondered, as I enjoyed a quick pot of tea whilst gazing out over the cobalt-blue sea.

And yet, Clovelly has survived and, I'm sure, will continue to do so. All it needs are people who don't mind living in a place that offers inconvenience in bucket lots, and, of course, tourists who don't mind paying a few pounds worth of entrance fee so that they can leave behind 21st-century life for an hour or two.