A WET AND WINDY WALK INTO A CHRISTMAS WONDERLAND 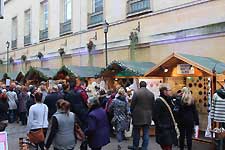 This week, with a mere handful of days left before the Big Day, I found myself struggling to get into the Christmas spirit. It is probably the wet and windy weather we're having, which is hardly conducive to festive thoughts.

Whatever the reason, I decided it was high time I did something about it. So I took myself off to Bath, which happens to be the home of one of the best-known Christmas markets in the UK. If anything was going to add some festive sparkle to my life, it was the sight of 170-odd wooden chalets festooned with fairy lights.

Over the years, I've seen the market grow in size and popularity. From the minute I arrived at the heart of the market, which spreads ever further from its hub around the Abbey and Roman Baths, it was clear that plenty of other people were also seeking a big of festive magic. 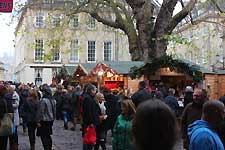 What I really like about Christmas markets is that they are generally chock full of gorgeous handmade gifts, from log-inspired reindeers to dangly glass tree ornaments and star-shaped paper lampshades. Bath's market is no exception. Whilst I was contemplating my purchases, I munched on hot nuts and roasted chestnuts. A stall selling hot mulled wine wafted some tempting smells my way.

Afterwards, I wandered over to Victoria Park, which is the home of Bath's ice skating rink. The weather was hardly crisp or wintry, but the sight of all those skaters whizzing around the ice to the accompanying music really got me in foot-tapping mood.

Sadly, Bath's Christmas Market comes to an end on Sunday. Others, however, do not. Like Bath, nearby Winchester's winter wonderland is set in the atmospheric close of the city's cathedral, and carries on for another week. Likewise, Manchester caters for last-minute shoppers, as does Birmingham, with its Frankfurt-themed version. Let the festivities begin.


FAR FROM THE MADDING CROWD

Many years ago, I made a motorbike road trip to the most far-flung point of Scotland. I arrived in Durness late one evening, dripping wet from the near-constant rain that had assailed me on my journey northwards. Needless to say, my first impressions of the place weren't great.

Later, though, after a reviving cup of tea, I was able to explore the area and fully appreciate its extraordinary wild beauty. It occurred to me that, compared with other more popular areas of Scotland, the majestic landscape of this north-west corner can so easily be overlooked. So it is great news that there are plans to establish a new Geo-centre in Ullapool next year, which is aimed to bring in more visitors.

The Geo-centre will be sited on the main road that runs through the North-West Highlands Geopark, also known as the 'Cradle of Geology'. The park was set up a decade ago to protect north-west Scotland's incredible geological legacy and landscape, which ranks as one of the most sparsely populated areas of Europe. In fact, there is so much space it is almost impossible to take in. And there are a multitude of tranquil glens, too, together with wind-whipped mountain peaks, golden beaches, mysterious caves, fathomless lochs and rugged rock formations.

Spin offs of the Geo-centre are expected to include a raft of geo-visitor friendly attractions, from geo-routes and geo-climbs to geo-rambles and even geo-adventures in the form of sea kayaking. Needless to say, the latter involves getting very wet. Perhaps not, then.


DISCOVERING THE JOYS OF WINTER CYCLING 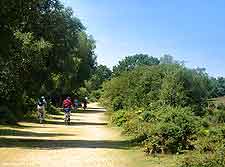 After a glorious British summer, I've got rather used to cycling jaunts that only require minimal clothing, a water bottle or two, and a generous application of suncream. The sort of trips out that involve parking your bike outside a cafe or pub and and enjoying a long cold drink in the sunshine. Last weekend, of course, I got a rude awakening. Wind and rain struck with a vengeance, nearly blowing me out of the saddle and setting me thinking about the prospects of cycling through the winter. I was briefly despondent, I have to admit.

And then I pulled myself together and set myself the task of considering how to make winter cycling a delight rather than a dread. For a start, winter is an opportunity to invest in new technology, something that cyclists excel in. I've already discovered the delights of my local bike shop, which sells light-as-a-feather merino t-shirts and windproof gloves, along with waterproof socks and neoprene overboots. Winter brings other hidden joys, too, like getting the opportunity to explore the cosy interiors of cafes and eat large quantities of cake which, as we all know, serve to insulate yourself against the cold weather.

Every now and then the ardent winter cyclist will reap the rewards of their perseverance. They'll find themselves pedalling through the countryside on a perfect winter's morning. The sky is blue, the air is crisp and although a glittery frosting covers fields and hedgerows, there is not a smidgen of ice on the roads to worry about. Whoever said that winter cycling couldn't be fun.