Since 1947, the City of Oslo in Norway has sent a Christmas tree to London. It's an annual tradition that has continued through the decades as a a token of gratitude for British friendship to the Norwegian people during World War II. The tree usually measures over 20 metres / 66 feet in height and is displayed in Trafalgar Square. It's become a real seasonal landmark in the city. In fact, it's hard to imagine Christmas without it.

The tree starts its journey from a forest just outside Oslo in the middle of November. Then, in early December, the tree's arrival in London is celebrated in style. The tree lighting ceremony is always a popular event, both with London's local residents and visitors to the city. This year's tree, which is a 46 year-old Norwegian Spruce, is an impressive sight. Even more so with the switching on of the 500-odd white twinkling lights that festoon its evergreen branches.

If you missed this year's tree lighting festivities, then never fear - there's still time to catch a glimpse of this most famous of fir trees. The tree will remain in London's Trafalgar Square until 5th January 2012. Even better, until Christmas, groups gather each evening to sing traditional carols in aid of charities and voluntary organizations.


IN SEARCH OF FESTIVE CHEER 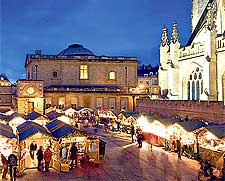 When you're stood in the middle of a Christmas market, a glass of Glühwein in one hand and a tasty Lebkuchen in the other, it's feels far from being bleak mid-winter. In fact, it's more than possible to forget the weather and the world's economic woes for a few hours. There's nothing quite like a visit to a Christmas market to get you into the festive spirit.

After heading down to my local Christmas Market in Bath recently, I'm reminded just what good places they are for kicking off the seasonal celebrations, and for picking up last-minute presents, too. They might be German in origin, but spin-off Christmas markets are now held all over Europe, Britain included. The city of Birmingham is home to the largest in Britain, with visitors to Manchester, Nottingham and Edinburgh also more than happy to engage in a spot of ice skating along with their shopping.

Few would deny, though, that Germany still remains the real home of the Christmas market - or 'Weihnachtsmarkt' - with around 130 of them dotted all over the country each year. We know them best for their rows of little wooden huts, usually beautifully decorated and packed full of great gifts. They emanate a sense of warmth and well-being, with their glittering Christmas lights, fast flowing mulled wine, and a pleasant sense of anticipation for the holiday that lies ahead.

And believe it or not, despite the recession, they've become even more popular than ever. I'm obviously not alone in yearning for a more authentic Christmas this year, then. One that revolves around thoughtfully chosen handmade presents rather than their mass produced counterparts plucked off big store shelves. One that includes everything from hand-crafted toys and trinkets to luxury seasonal snacks like freshly roasted chestnuts and spicy mulled wine.

I've promised myself that, next year, I'll really start the Christmas celebrations in style - I'll head to the home of the oldest German Christmas Market in Dresden. Or maybe to Leipzig's Christmas Market, which dates back to the mid-18th century. The market's attractions this year include the world's largest free-standing Advent calendar. Whichever market I choose, I'll be looking to experience one thing - a taste of Christmas past - with a few Christmas presents thrown in for good measure.


A TITANIC REVIVAL FOR BELFAST 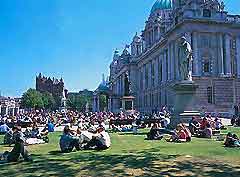 Think of Belfast and it probably won't conjure up a picture of your ideal holiday destination. Before the Good Friday Agreement in 1998, the capital of Northern Ireland was thought to be a city that was best avoided. Today, though, Belfast has grown into a great place with plenty going for it. In fact, according to National Geographic Traveller, it's where we'll all want to head over the next few years. The international magazine recently featured Belfast city as being among the world's top destinations.

Where's best to start? Well, there's the City Hall, the Botanic Gardens and the prestigious Queen's University to explore. Even the city's famous giant murals on the Falls Road have become another stop on Belfast's tourist trail.

Aside from the city's fascinating cultural and industrial heritage, I'm mightily tempted to head to Belfast to sample some of the sea-themed events that are on the calendar. Next year sees the centenary of the sinking of the Titanic. Look out for Titanic-themed attractions, including a brand new multi-million pound visitor centre built on the site of a former shipyard. Belfast, of course, was where the famous ship was designed and built.

Then in July 2015, the popular Tall Ships festival returns to the city. In 2009, it drew in vast crowds of spectators and included everything from fireworks and fun fairs to street theatre and live music.

Belfast might still count as one of the world's undiscovered destinations. Perhaps not for much longer.