IN SEARCH OF ADVENTURE 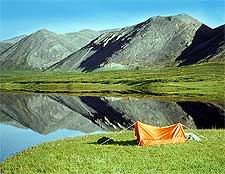 Picture it. Ahead, for as far as you can see, stretches a vast expanse of sand, glowing deep amber in the last rays of the setting sun. The tent's up, the stove's on, and you're looking forward to experiencing the peace and solitude of the desert. After all, there's not a soul around for miles... Then, suddenly, a coach-load of tourists pulls up and your three-week adventure trek into the Sahara is starting to look, well, a bit tame.

In an age when it feels like every last remote and rugged corner of the world has been explored, photographed and written about, adventure-seekers need not despair. The risks are still there to be had, for sure. You could, for instance, start off with something obviously adventurous, like an arduous trek through the mountains of Peru. Or what about rafting among the crocodile-infested waters of the remote River Omo in Southern Ethiopia? Dog sledding north of the Arctic Circle anyone?

If the thought of a high-adrenaline sports holiday leaves you cold, though, you'll be relieved to discover that adventure travel can be found much, much closer to home - and at a considerably more budget-friendly price. Take a simple trip through France by car as an example. You may ask where, in a country liberally sprinkled with motels, hotels and perfectly comfortable chambres d'hôtes, is the adventure in all that? Have a go and you'll find that any seemingly ordinary holiday abroad can soon become your own private adventure.

All you have to do is make sure you have the right ingredients. Don't be tempted to overspend on the latest gadgets - an aged car, which inevitably develops a mysterious mechanical fault en route will do just fine. A chat with the garage owner who fixes it will put you in touch with the people whose country you're visiting. Likewise, a perfectly ordinary family tent rather than some wonder of technical wizardry will transform battling with the elements into a real challenge rather than a nasty inconvenience. Torrential rain and gales that batter the said tent into a near-horizontal position will make your heart race just as much as if you were engaged in a high-risk sport, believe me.

White-water rafting in the Amazon it might not be, but an adventure of your own making it most certainly is.


THE WONDER OF EUROVISION 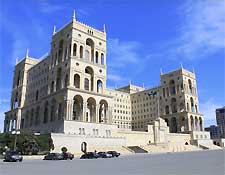 As the votes rolled in at last weekend's Eurovision Song Contest and a winner slowly emerged, it was likely that quite a few of us were left pondering the exact whereabouts of Azerbaijan.

A quick look at the atlas is all it takes to enlighten us. This former Soviet Republic turns out to be perched on the cusp of Europe and Asia, surrounded by Russia, Georgia, Armenia, Iran and Turkey on one side and the Caspian Sea on the other.

Azerbaijan might be a small, little-known country, but it's nonetheless full of surprises. Who knew, for example, that a recent oil boom has brought serious wealth to Azerbaijan. Or, for that matter, that Azerbaijan boasts an astonishing 6,000 historic sites, ranging from ancient cities and palaces, to forts and mosques, and even rock art-encrusted caves.

Another lesser-known fact is that Azerbaijan has nine ecological zones within its borders. Which is pretty amazing if you consider that only 11 exist in the world in total. So, in essence, you can have a taste of pretty much any holiday experience you fancy, from subtropical heat to chillier Alpine mountains.

First stop for most visitors to Azerbaijan will inevitably be its capital city. Baku is the sort of cosmopolitan city that you can find all over the world. There are skyscrapers and busy roads and equally busy city people. Baku also has a well-preserved Old City, awarded World Heritage Site status in December 2000.

Capital cities just have to be explored, but for many of us, the real allure of a place like Azerbaijan lies beyond 'big city' life, in more remote regions where life runs at a considerably less frantic pace. Along Azerbaijan's southern coast, pretty seaside towns abound, as do opportunities to bathe in the warm waters of the Caspian Sea - a particularly attractive proposition, it has to be said. To the north, are the Caucasus Mountains, populated by villages like Xingaliq. Surrounded by impressive mountain peaks, places like these offer a unique glimpse into Azerbaijan's more traditional side.

It's estimated that around a million tourists make the journey to Azerbaijan each year. That might sound a lot, but compared to neighbouring Turkey, for example, with over 28 million visitors a year, it only goes to highlight one thing. That until last Saturday, Azerbaijan was ever-so-slightly off the tourist radar. What a difference a song can make.


A TASTE OF PARADISE 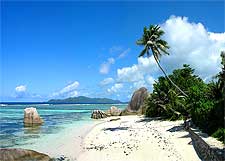 Over the past week, one very well-known British royal couple have put a cluster of islands in the Indian Ocean into the spotlight of the world's media. Whilst their ultimate destination remains unknown, it's no secret that the Seychelles is the quintessentially romantic destination for honeymooners intent on starting off married life in the lap of luxury.

But the Seychelles is about more than private islands and posh hotels. Unlikely as it may seem, you can still enjoy a taste of tropical paradise without first having to win the lottery.

In a place where the sun shines all day long, the beaches are white and sandy and the waters are pristine, you probably won't even notice that you're keeping to a budget. For those odd moments when you do venture inside after a spot of snorkelling, sunbathing, or just wandering through a local street market, a small guesthouse or family-run hotel will do just fine. Likewise, don't think of dining out at a local cafe on traditional Seychellois dishes as a chore - it's an experience to be savoured. And as for enjoying a cruise, all it takes is to buy a ticket for the ferry boats that regular ply the Indian Ocean between the main islands of Mahé, Praslin and La Digue.

Which all goes to show that paradise on a budget can still feel like a five-star break from real life. Look out for our World Guide to the Seychelles, which is being written right now and will be launched next month! 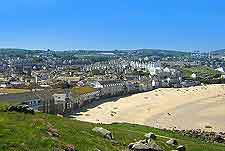 When it comes to the weather, a British holiday in May can generally mean anything from delightful spring sunshine to the odd flurry of snow. This year, though, the UK weather has surprised everyone, with temperatures in excess of anything in the records since they began in 1910. This is good news indeed for the great British seaside resort.

When you've the pick of Spain, Italy and beyond, the appeal of British seaside resorts may not be immediately obvious. But if the sun happens to be shining, the wind nothing more than a gentle cooling breeze and you're only feet away from the nearest ice cream vendor, then surely there's nowhere better - especially if you've a young family to entertain.

It's worth noting that when it comes to cleanliness, many of Britain's beaches are rated as excellent. According to the UK Marine Conservation Society, more than 80% of beaches in England and Wales are rated as being clean enough to stand up to new European standards due to arrive in four years time. Proud holders of Blue Flag status in 2010 include Torbay and the Isle of Wight, both in the South of England.

It's not just a question of sandy beaches, though. There are also the resort towns themselves to consider. The northern seaside town of Blackpool has everything from an iconic tower and ballroom to a thrill-a-minute roller coaster park. On the south coast, Brighton has its exotic royal pier, as well as a distinctly Bohemian feel amongst its pavement cafes, vintage shops and restaurants. Families flock to the safe bathing spot of Weymouth in the South of England, as do keen yachtsmen and fishing enthusiasts. The Cornish resort of Newquay offers a wealth of water sports aimed to exhilarate, along with an enviable riviera coastline of cliffs, caves and coves. And of course, there's that other Cornish jewel of St. Ives, famous for its artistic leanings and gourmet dining as much as for its stunning golden sands. Lots of people agree; St Ives was recently voted in an online poll as the best beach resort in Britain and one of the top ten in Europe.

So, what makes the ideal great British getaway? Undoubtedly, there has to be a long stretch of sandy beach. A wide promenade is perfect for a spot of strolling or people watching. And a few historic buildings help to create old-fashioned charm and atmosphere. Above all, though, every seaside town worth its salt must have plenty to keep us entertained - just in case the weather does happen to take a turn for the worse.