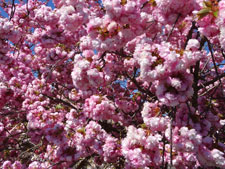 A while ago, a friend of mine happened to mention that springtime in the American capital, Washington, DC, was a special time for her. That each year she looked forward to the spectacular flowering of the Yoshino cherry trees, which brought an explosion of colour to the city. This week, I was reminded of her words by an announcement made by the National Park Service. After much deliberation, the statement went, the peak bloom date this year would be between 31st March and 3rd April.

Washington, DC acquired its cherry trees - all 3,000 of them - in 1912. A gift from Mayor Yukio Ozaki of Tokyo, they were planted in West Potomac Park, on the north bank of the Tidal Basin. The first festival was held in 1927 as a relatively simple affair. Since then, it is grown into a four-weekend-long celebration of the arrival of spring in the city and the original gift of the trees.

These days, the arrival of the first blooms - or Blooming Period, as it is known - is also taken very seriously. Predicting when the buds will open is no easy matter to predict, particularly when you take into account changing weather conditions. Extraordinarily cold or warm weather can delay or speed up the process. A frost that arrives late on in the season can stop the trees from flowering at all.There is even such a thing as Blossom Cam, so ardent cherry blossom watchers don't miss the arrival of all those important pink and white blooms.

That said, the sight of all those cherry trees is spectacular even if you don't get to see them during the peak bloom period. Each stage of bloom, as the flowers unfurl, can be just as wonderful a sight - from the moment when the buds are about to burst into life to the moment when they float to the ground. And if the Tidal Basin gets too crowded, it is worth remembering that cherry trees also grow in the grounds of the Washington Monument and in East Potomac Park.

This past month saw the 80th birthday of what is widely regarded as one of the most iconic planes to have taken to the skies. In March 1936, a prototype Spitfire took off from Eastleigh Aerodrome near Southampton. If you've ever been to an airshow where a Spitfire has flown overhead, it is impossible to miss the throaty roar of the plane's Merlin engine, let alone mistake its distinctively shaped wings for anything else.

The anniversary, which took place earlier this week, was attended by pilots young and old: from a veteran of the Second World War to newly recruited RAF Air Cadets. A celebratory fly-by, which retraced the route of the Spitfire's original first flight, passed over the site of the former Supermarine factory in Woolston, Southampton, where so many of the planes were built. It also passed close to the final resting place of the plane's chief designer, R J Mitchell.

If you missed out on the festivities, there are still plenty of opportunities to see the Spitfire for yourself. Around 50 working examples have survived. Many can be found on display in museums all over the world. The Royal Airforce Museum at Cosford is home to the oldest surviving example of a Spitfire 1. The Spitfire and Hurricane Memorial Museum located at Manston Airfield in Kent also boasts two restored versions of the classic fighter plane. Meanwhile, Biggin Hill's Heritage Hangar displays a large collection of airworthy Spitfires and, should you want to get even closer, even offers the opportunity to 'Sit in a Spit'.