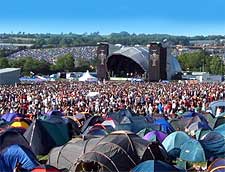 Take 170,000 campers, 60 stages and 2,200 performances to a farm in deepest Somerset, England, in the middle of June and what do you get? Mud. On Wednesday, the gates to Glastonbury, Europe's largest and best-known music festival, opened and festival goers were greeted with a hint of sunshine and quite a lot of rain - in other words, quintessentially English 'mixed weather'.

Glastonbury-devotees are used to extreme weather conditions and take them in their stride. The music helps. This year they can look forward to a star line-up of performers that includes U2, Coldplay and Beyonce, as well as Kaiser Chiefs, The Chemical Brothers and Primal Scream.

Glastonbury has come on a long way since it was first held in 1970. Back then, the price of entry was a very reasonable £1, which even included free milk from the farm. Around 1,500 festival-goers gave it a try.

Nowadays, the festival site extends over a vast area of countryside near the tiny village of Pilton, just three miles from the little-known market town of Shepton Mallet. In fact, for three days, it becomes the second largest township in Somerset, after Bath. Entrance is an eye-watering £195 a head and tickets sell out in the bat of an eyelid.

According to weather forecasters, as festival-goers prepare to de-camp on Sunday, the weather is due to improve. Typical. 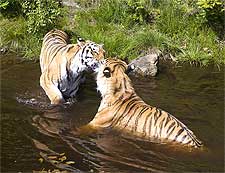 If you prefer to come back from your annual holiday with great wildlife photos rather than a suntan and a bag of well-thumbed beach reads, then you're not alone. It's estimated that around 12 million wildlife-related trips are taken each year, ranging from birdwatching and butterfly-spotting to safari tours.

There's no doubt that, for some developing countries, wildlife tourism has become a mainstay. But whilst the commercial potential of animal watching and tracking is obvious, you can't help but worry that it can lead to a rash of new hotels and resorts, disrupting habitats and animal life to boot. You only have to think back to the early days of the national parks some sixty years ago, when sport hunting and fishing were the mainstay of most safari tours, to see the sort of problems that could occur.

Thankfully, since then, the sort of holiday experiences offered by wildlife tour operators has undergone a transformation. Today's wildlife tourists want to combine a keen interest in wildlife with a chance to 'get away from it all'. In short, they want more than a day trip to a local zoo.

There's no doubting that the merest glimpse of a big cat, rhino or elephant in its natural habitat simply can't be beat. If big cats are your thing, then the best locations are in Bangladesh and India, the most famous one being India's Ranthambore National Park. East Africa is seen as the home of the big game safari. This region still boasts some of the largest, best-stocked reserves and parks, including the Serengeti National Park in Tanzania. Outside of the traditional 'big parks', many wildlife tourists are also turning to more unusual safari destinations, such as Sweden, where you stand a good chance of spotting elk, bear and wolves. In Mexico, visitors can admire Monarch butterflies in a Special Biosphere Reserve.

In a world where we're - thankfully - now much more eco-savvy, wildlife tourism can make a valuable contribution to the conservation of a country's fauna and flora. Many wildlife parks have become proficient at breeding rare species and releasing them into their natural habitat. Wildlife tourism can also contribute to monitoring of rare and endangered species. And yes, wildlife watching can generate extra income, which can be put to use not just for conservation. It can also help in maintaining the communities and cultures of those who live in the parks and reserves. 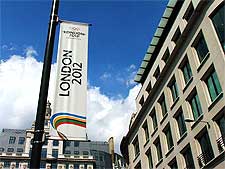 Just announced is the fact that at least 70 British towns and cities will be visited by the spectacle that is the Olympic torch relay. Starting in England's most south-westerly point of Land's End
next May, the torch will finally arrive 70 days and 8,000 miles later at the brand-new Olympic Stadium in London. It's sure to be quite a contrast to the last Olympic Games to be held in Britain, when the torch took a much more frugal - and rapid - route to London.

Whereas the 1948 torch was whisked directly from Greece to London in just 11 days, the 2012 relay route will take in the whole of Britain, from large towns and cities, to quaint villages and some of the country's most scenic regions. It will include some popular English tourist destinations, such as Plymouth, Oxford, Cambridge and York, as well as the likes of Birmingham and Manchester. Along the way, six islands will also be visited, including remote communities in Orkney, Shetland and the Isle of Lewis in Scotland. The Olympic flame will also travel across the Irish Sea to Northern Ireland and, it is rumoured, may even make it as far as Dublin.

Whilst it will be difficult to out-do the astonishing 50,000-strong crowd of 'torch supporters' who lined the docks at Dover back in 1948, organizers are predicting that as its more modern counterpart wends its way through Britain, thousands will turn out to celebrate the occasion - come rain or shine.