FOUR WOMEN IN A BOAT 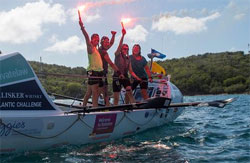 There are many ways of crossing the Atlantic. Taking a cruise on a luxury liner is one of them. For others, though, the sight of all that water motivates them to take on a slightly different challenge. Four mums from Yorkshire took up the baton held out by the organisers of the Talisker Whisky Challenge in December last year. They joined 25 other teams to row 3,000 nautical miles across the Atlantic Ocean. Earlier this week, they succeeded, crossing the finishing line after in 67 days, 5 hours and 2 minutes.

They also succeeded in becoming the oldest team of rowers to make the gruelling crossing. Known as 'Yorkshire Rows', their Guiness World Record-breaking journey hit the headlines this week, when the foursome arrived in Antigua in 22nd position.

Reading about their exploits, and those of the other teams made me think about why people take on these sort of challenges. In the case of the 'Yorkshire Rows' ladies, it was to inspire other working mums of a certain age to give adventure a go and try to achieve something that, on first sight, looks impossible. They also set out to raise a large sum of money for local charities.

The Talisker Whisky Challenge began with a few ideas passed around by Sir Chay Blyth and John Ridgeway in 1966 as they rowed across the North Atlantic, from Cape Cod to Ireland. Along the way they battled with hurricanes and house-sized waves, with barely enough food to sustain the two men. Their epic voyage was to serve as the foundation for what is now widely regarded as the toughest row in the world. I've no doubt that the four Yorkshire mums, now safely back on dry land, will agree.


ENGLISH GARDENS THAT SPRING FROM NATURE 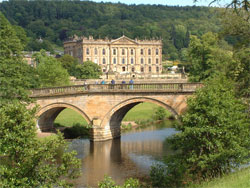 This year marks the 300th anniversary of the birth of Lancelot 'Capability' Brown, England's best known landscape garden designer. So, it is fitting perhaps that 2016 has also been named 'The Year of the English Garden'. As a nation of garden lovers, we can boast some of the finest gardens in the world - including many that are the work of the 'master of landscape' himself. It certainly looks like being a celebration that will be both spectacular and sublime.

'Capability' Brown designed many of England's grandest stately homes, including the likes of Chatsworth House in Derbyshire and Blenheim Palace in Oxfordshire. He transformed the way that gardens were designed, changing the trend from formal and enclosed designs to a fashion for natural and open spaces. Think parklands, woodlands, man-made lakes and vast vistas. One thing was for sure, 'Capability' Brown wasn't adverse to moving thousands of tonnes of earth in his desire to create gardens that looked like they would sprung from nature, itself.

This year, there'll be plenty of opportunities to see the work of the master garden designer. Thirteen of Brown's biggest and best garden locations will be hosting special exhibitions, including Croome Court in Worcestershire in March. An exhibition on 'Making the Landscape' will also be held at Winchester Discovery Centre. Other English garden-inspired events range from the Orchid Festival at Kew's Royal Botanic Gardens, which brings a splash of colour to winter from February to early March, to the RHS Chelsea Flower Show and RHS Malvern Spring Festival, both in May this year.

Whilst I'm no gardener, myself, I can still appreciate a fine flowerbed, sweeping green lawn and natural woodland when I see one. So, with spring only just round the corner, I'm sure I'll be inspired by some of the garden delights on offer over the coming months.