THE START OF THE COSY SEASON

Every year, autumn takes me by surprise. I wake up one day and it suddenly dawns on me there is a chill in the air and that the leaves on the trees are turning yellow. Whilst I regret the passing of the summer, I can't help but feel a hint of excitement about the arrival of autumn. If summer is all picnics in the park and days on the beach, autumn will always be, for me at least, the start of the 'cosy season'.

I'm not alone. In fact, earlier this month, one British college started to teach its students all about cosiness Danish style. There, the concept of cosiness even has its own name - 'hygge' - and it is reputed to make the people of Denmark the happiest in the world, at least according to the United Nations.

Of course, hygge means different things to different people. Rooted in the 18th-century Danish idea of togetherness and well-being, these days it translates into spending time with your family and friends, eating comfort food, drinking wine, lighting candles, and sitting by the fire.

In a country that experiences around 17 hours of darkness every day during the winter, you can see why a spot of homely indulgence does makes sense. Faced with the prospect of chilly nights and dark days ahead, you would naturally want to find something to lighten the mood.

Whether or not hygge is exactly the same as the British concept of cosiness is the subject of much debate. Danes would argue not - that the idea is unique to their country, tied up with the way that people behave towards each other. It is about creating a sense of comradeship.

How to create hygge in your own home? Suggestions I've come across range from curling up on the sofa with a good book to inviting a few close friends round for drinks and a nice meal. Personally, I'm off to close the curtains, make a pot of tea and huddle round the fire. 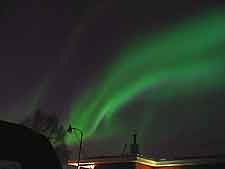 A friend of mine recently returned from a trip to Iceland to see the Northern Lights a trifle disappointed. She commented that she may have had a better view in Wales, where she lives. She might well be right. By all accounts, in the next two weeks, solar conditions are favouring dramatic light displays in the UK skies that merit staying up after dark.

Northern parts of the UK are prime territory for spotting the distinctive red and green skies that make up the Northern Lights, also known as the 'aurora borealis'. It is not just the geographical location that makes it more possible in these areas; it is also the fact that there is a chance of lower light pollution levels. Rural areas are best, far from cars and buildings. So too are the hours between 10pm and 2am. In the UK, there is also the factor of the weather. Clear skies offer the best opportunity to see these dazzling light displays. Cloud and fog are definitely not good.

As you would expect, Scotland is one of your best bets. Head to Caithness, or even the Orkney Isles and you will more likely to be rewarded than anywhere else. But predictions are also circulating which say that people in north Wales, Cumbria and Ireland may also have a chance of spotting some rather spectacular light shows. Indeed, there have been sightings in Northern Ireland, Inverness, Kendal in the Lake District, Anglesey, and Lancashire already this week.

Thankfully, the guys at AuroraWatchUK, a group of space physicists at Lancaster University, are on the ball when it comes to predicting the best places to view the Northern Lights. Keep an eye out for their alerts, prepare to travel and keep unsociable hours, and you can't go wrong. 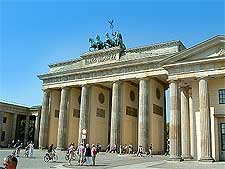 Exactly 25 years ago to the day, I was camping on the island of Rugen. A brisk wind was blowing off the Baltic Sea, making it feel distinctly chilly. Daylight had long since faded into night. From some distant town came the sound of fireworks. It was the day when German unification would take place, a momentous occasion when East and West Germany would once again brought together as one country. No doubt in Berlin there were parties aplenty, but that evening in Rugen, those few fireworks were the only sign I could see that history was in the making.

Today, millions are set to celebrate this landmark 25th anniversary of German Unity Day. Whilst there'll be events going on all over Germany, its largest city, Frankfurt, has the honour of being the venue for the biggest national festivities. German Chancellor Angela Merkel will be in attendance. Berlin's Brandenburg Gate will also play a part in this year's events, with a street fest, music concerts and beer gardens all helping to keep the party moving. There'll be jazz and swing music in Hanover, too.

For some cities, though, the day will be marked more quietly. Leipzig will be staging a week-long programme based on the theme of 'Unity in Diversity' that will include discussion sessions on migration and refugees. The city was famously at the heart of peaceful demonstrations that took place before the fall of the Berlin Wall to put pressure on the East German government. In Bonn, a Museum Fest will be held, and local people will be given the opportunity to come together to share their memories of those historic events of twenty-five years ago.

And perhaps that is what, for many people, German Unity Day is all about - a chance to enjoy spending time with friends and family, and an opportunity to reflect on how Germany has changed in the intervening decades. For Rugen, the changes have been dramatic. After my visit to Rugen all those years ago, it is hard to believe that what was once a remote East German holiday resort has today become one of the hotspots of German tourism.